See below for more notes, quotes & miscellany on Benjamin Britten during this, his 100th birthday weekend.

Friends, remember! | Gold is tried in the fire | And the mettle of man | In the furnace of humiliation…
… God give us all | The strength to walk | Safe in the burning furnace | Of this murderous world.
– from The Burning Fiery Furnace (libretto by William Plomer) 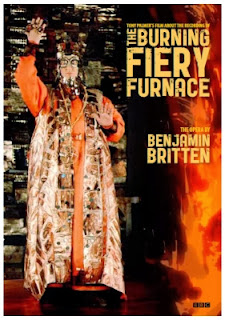 Listened this morning to a vivid performance of The Burning Fiery Furnace from the Aldeburgh Festival by Mahogany Opera produced in Orford Church, the space for which the three Church Parables were planned and premiered. (Memory: this is where we saw a 2003 production of Lucretia, which generated interesting discussion and disagreement over the Christianization of the story vis-à-vis the ending. Both our Britten-Pears Programme directors, Michael Chance and Tim Carroll, felt strongly the anachronistic redemption of the ancient Roman tragedy “didn’t work.”) The Burning Fiery Furnace production certainly did work – it was so well-paced, balanced and characterized – you could imagine Nebuchadnezzar’s elaborate robes, the Babylonian “god of gold,” the stained-glass window behind which the Angel appears, etc, etc - just listening via online radio.

[N.B. Having long sat with these pieces and considered programming them, this morning was the first time I believed the right production could not only be pulled off locally, but would be both entertaining and moving. The instrumental march, for example, would be a sure hit when done with a band who embraces the drama (as they must). It would require particular care in casting and production planning, and would have to be strongly supported by the right church.]
___

Britten’s String Quartets – this Centenary year and weekend notwithstanding – are a neglected room in the mansion of his legacy, especially on the US side of the pond. This is our loss. His first quartet was commissioned by the same American patron (Elizabeth Coolidge) who sought new quartets from Bartok and Schoenberg. Composed while he was in the US in 1941, Britten’s String Quartet No. 1 in D, op. 25, won the young émigré a Gold Medal from the Library of Congress for service to Chamber Music. Its shimmering opening – a perilously difficult passage for the upper strings – reflect the “California Sun” where Britten and Pears were living at the time, according to the composer, David Matthews. The Andante third movement is an early example of Britten’s gift for masterfully sustained lyricism; a trait he shared with his musical heroes Mozart, Schubert and Mahler.

One of the reasons the Quartets (like much of his instrumental output) are lesser known is
a result of the large shadows cast by his operas and vocal works. String Quartet No. 2 in C, op. 36, comes from 1945, the same year as Peter Grimes, and the 250th anniversary of the death of Henry Purcell. Written after his Purcell inspired song-cycle, The Holy Sonnets of John Donne, the 2nd Quartet is dedicated to Britten’s beloved Baroque forbear. The first of the quartet’s three movements was described by the scholar Hans Keller as Britten’s “most deliberate masterpiece.” The final movement, longer than the first two combined, is a Purcellian ground-bass “Chacony,” with 21 (!) variations. 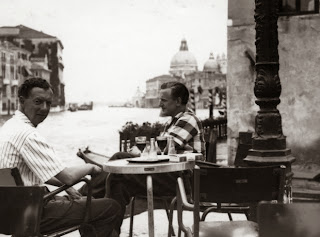 Keller hoped Britten would continue to write chamber music, and string quartets in particular. He would have to wait 30 years for the realization of this wish, in what must be one of the most poignant examples of delayed gratification in classical music. What is remarkable is the consistency of not only inspiration, but style, voice and character.

Originally called a “Divertimento,” String Quartet No. 3 in G, op. 94, was completed in Venice in 1975. Though most Britten commentators cite the "arch form" of its 5-movements by linking the outer movements, I would call the form chiastic, and highlight the central, “Song,” movement as its crux. The opening movement is called “Duets,” and features aptly named textures between the voices. The final movement is subtitled “La Serenissima,” after Britten’s (and Pears’) favorite city; a place to which they repaired at crucial times in the composer’s career, and where he always was able to work with inspiration. In addition to assuming another Baroque form (“Passacaglia”) the 5th movement quotes from Death in Venice and mirrors the journey of the opera’s hero, Aschenbach. This was the final role Britten wrote for his muse and partner, Peter Pears. The central movement of his final quartet is a ravishing song without words. It is Britten’s "Adagietto" to Pears, as that of Mahler’s Fifth Symphony was to Alma (and beloved by Britten long before Mahler was in vogue. See below for more on Mahler and Britten. On another note, Britten dedicated his Nocturne, op. 60 to Alma Mahler; their correspondence is mutually supportive and admiring). 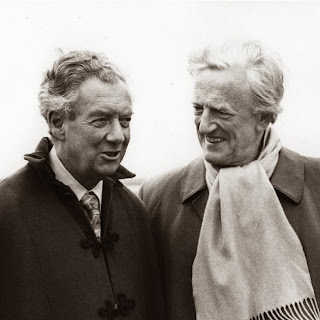 Britten’s instrumental Schwanengesang is one of his most sublime achievements. Its rarified atmosphere is possessed ‘of a profound beauty more touching than anything else, radiant, wise, new, mysterious—overwhelming,’ according to none other than Pears himself.

All three of the Church Parables and String Quartets were part of the Britten 100 festivities from BBC Radio 3 and are available online for the next week.
Posted by Scott Williamson at 12:43 AM