Rued Langgaard (1893-1952) is one of this summer’s ‘beautiful eccentrics’ about whom we’ve been musing since at least last spring… We re-discovered his music a couple of years ago at the BBC Proms (the “world’s greatest classical music festival” is available online at: http://www.bbc.co.uk/proms)

Though not as much Wagner is on this season's Proms as we'd like - we expect the bicentennial year of Wagner & Verdi in 2013 to mind those gaps. [See Vissi d'arte posts on Wagner's gothic world as Opera Roanoke prepares to mount its first Wagner production: The Flying Dutchman] This year's proms have already offered lived performances of Debussy's Pelleas & Melisande, Berlioz's Les Troyens, Britten's Peter Grimes, Mozart's Marriage of Figaro, Gilbert & Sullivan's Yeoman of the Guard. Coming up the first week of Sept. is Nixon in China by John Adams. It is a festival that lives up to its billing as the greatest classical music festival in the world.

Prone to digression this season of exciting travels, adventures and artistic musings, we have enjoyed spending time with artists of varying genres who might be “outside the box” of the mainstream, so-called ‘members of the avant-garde’ or fascinating characters unknown because unread un-translated unsung or unperformed… A couple of eccentric writers relatively new to us include G. de Nerval & H.P. Lovecraft. Their nocturnal settings, strange dreamworlds and mysterious visions connect directly to the Romantic & Gothic realm of Wagner, all of whom were influenced by the Tales of E.T.A. Hoffmann and the Vampire craze Byron helped propagate across the dark & stormy 19th century. [See the opera musing on Romantic Gothic & Wagner]. 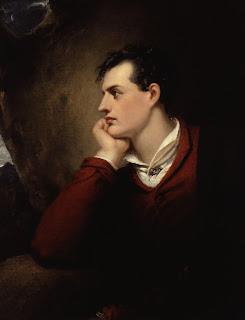 We mentioned Langgaard and the Proms. Another eccentric featured at this summer’s Proms is the British composer (with ties to Germany & the US) Frederick Delius. Delius (like Debussy) is 150 this year, and his hard-to-categorize blend of impressionism, Englishness colored with Continental flavors and the Florida sun makes for a neo-romantic sound world unlike any other composer. Like Vaughan Williams & many fellow Brits interested in pushing the boundaries of Victorian propriety to allow for more creative breathing room, Delius loved Walt Whitman. Again, we digress…Langgaard, Delius, Wagner…

Interruption: Maestro Gianandrea Noseda shared – via the BBC Proms announcer – that he could program Mahler’s nocturnal Seventh symphony “only once every 3 or 4 years” because of how “dark and difficult” it is “to perform.” We second that appraisal. The fatigue from performing – of literally re-creating a masterwork – whether it be a 75-minute Symphony, a one-act or Monodrama, a full-length opera or play – is akin to the exhilarating exhaustion that accompanies the creation of such a work (as we know from composers’ own testimony about the creative process – see Harvey: Music & Inspiration). This work involves the entire being – mind, body and spirit – and is a “holistic” approach to life as it requires the artist to burn with a smoldering passion that not only fires every fibre of her being but is electric enough to captivate an audience so they might be moved, touched, affected and enlarged by the first-hand experience with artistic genius…

But back to Langgaard’s eccentric vision – Mahlerian in scope & originality, if not always in style – his 6-minute 11th Symphony called Ixion. We are reminded Ixion was one of the mortals punished by the gods with a torture of everlasting repetition – “spending his life turning a wheel of fire in endless torment, like Sisyphus” as the composer put it (Sisyphus – endlessly rolling the boulder uphill – is frequently conflated with Ixion in mythological commentary and criticism, for inquiring minds…) The top of Langgaard’s score reads “Ixion: Bound to an eternally rolling flaming wheel…” The daddy of those tortured titans is not Sisyphus so much as Prometheus. (Though Camus might have us think so in his engaging re-imagining The Myth of Sisyphus). 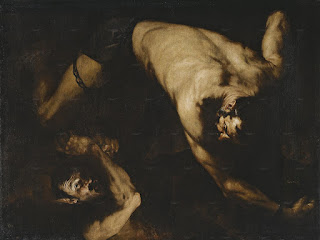 Nearly every romantic artist invokes Prometheus – from Shelley to Beethoven to Wagner to eccentrics like Scriabin and Luigi Nono. A compelling biography of the artistically inclined scientist Robert Oppenheimer is subtitled “An American Prometheus.” Mary Shelley’s seminal gothic "monster" novel is Frankenstein, A Modern Prometheus. These last two examples remind us the dark shadows of ambition are described as “promethean.” It can be dangerous and destructive as a plague from the gods, the invention of a murderous monster or nuclear holocaust. But Prometheus – like most of the gods and mythic figures – is Janus-faced, two-sided (multi-faceted) and complex. His ambition & drive can be positively creative and his vision & the will to act on it is the origin of all human striving & achievement (this is also the heart of romantic philosophy in misunderstood thinkers & poets like Schopenhauer and Nietzsche, to grossly oversimplify…) Where romantic ideals have flourished (as they did in the Renaissance, for example), the creative promethean artists of an era have brought forth nourishing fruit. Prometheus is a symbol of both the fire of creativity and its audacity. He is the “bringer of light” to humanity, enabling not only the creativity found in the arts, but the life-sustaining crafts of industry and artisanship. He is at once the prototypical romantic hero and the founder of modernity. With the fire of creativity also came the flames of industry and the beginnings of humanity’s ultimately futile attempts to control and manipulate the elements and Nature. Humankind, like Prometheus himself, has always been burned by his own flames…

Langgaard’s own life appears to be a series of Promethean or Sisyphean tortures, an outcast and iconoclastic artist’s Herculean efforts to find a room in a closed system (as some have described the Nielsen-loving Danish music establishment of the first third of the 20th c.) One of his biographers (ironically named Nielsen, the name of Langgaard’s alleged nemesis) cites the maverick composer’s “obstinacy, protest, total lack of inhibition and complete disregard for convention” – doesn’t he sound interesting already? The expressive interval of the minor 7th is prominently featured in this mini-symphony (cum tone poem) That 7th is famously used by Bernstein at the start of his torch song “Somewhere.” It’s the interval that arches dramatically upwards between the first two words: “There’s a…[place for us]”). The romantic expressivity and
open-ended harmony is at once a leaning-into and a longing-towards something indefinable if not inexpressible… like love or eternity…

Langgaard did not do himself any favors, as the critics and academics ungenerously like to say, by his “eccentric… and publicly proclaimed beliefs.” His “idiosyncratically religious and apocalyptic form of Christianity” was too unsettling or reactionary or just “too weird” for the establishment. Underscoring the symbolic quality of his ill luck – because it cuts both ways - his music was too “Wagnerian” or “conservative” for the same musical establishment that decided what was avant-garde, what was mainstream and what was outside – marginalized, outcast or merely ignored – as Langgaard increasingly was…) 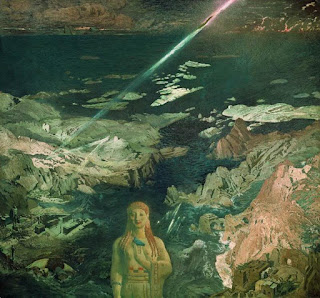 There was also the issue of his convention-defying “ill-fitting clothes, his cultivation of the appearance of a long-haired 19th century virtuoso.” Like many a romantic or Byronic hero, a hippy, freak, misfit, exile or genius nerd, Langgaard’s due came later. That is to say, if he enjoyed even modest success in his lifetime, like Mahler before him, it is only 50 years after death such an eccentric vision begins to be embraced.
Posted by Scott Williamson at 4:29 PM No comments: