Summer with the BBC Proms

Fellow Music-Lovers and Colleagues (in need of musical refreshment):

The BBC Proms is here again. If I finish this quick post in time,
you should be able to click a link and listen live to the second half
of today's "programme" featuring the BBC Philharmonic in
British orchestral works (by Elgar, Bantock, and Walton). Because
the Proms is nothing if not "all in," the meaty program also concludes
with the launch of one of their many focuses (or "themes") for each particular
season. Tchaikovsky's so-called "Fate Symphony," the 4th, kicks of a survey of
each of the Russian Master's 6 symphonies.

The Proms is the greatest music festival in the world in size and scope -
and many non-Brits would agree - and content.

Click this link to listen live everyday until Sept 7. 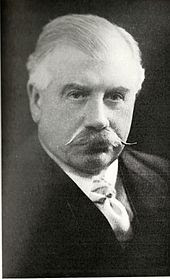 (Sir Henry Wood, British conductor and champion of his colleagues,
Elgar, Parry, Bantock, Stanford, et al.
He founded the the Proms in 1895)

Here's a sampling of the guest soloists, orchestras and the requisite anniversary celebrations:

World Premieres by over a dozen contemporary composers
(of all styles, shapes and sizes) 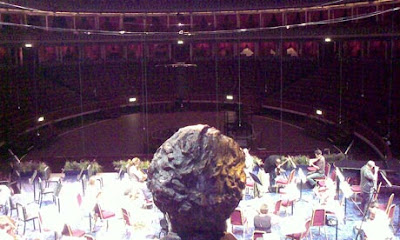 The view of the Royal Albert Hall from behind the Bust of Sir Henry.
He is atop the organ, overlooking the orchestra.
The middle-ground (shaped like a half-sun on the horizon)
is where the "Prommers" stand for each concert.

If you ever are in London between mid-July and early September,
be sure to join the "queue" that day and get your SRO ticket
for whatever is on the docket.

P.S. Two things: the concerts which start at 19:30 GMT translate to 2:30 p.m. EST;
and if you listen to a symphony or multi-movement work, don't be surprised to hear
applause: the Proms audience is among the most revered in the world for their
one-of-a-kind attentiveness, openness to new and unfamiliar works,
and their infectious enthusiasm whenever they decide to applaud or clap
for an encore. Enjoy!

Posted by Scott Williamson at 4:45 PM No comments: