And some time make the time to drive out west
Into County Clare, along the Flaggy Shore,
In September or October, when the wind
And the light are working off each other
So that the ocean on one side is wild
With foam and glitter, and inland among stones
The surface of a slate-grey lake is lit
By the earthed lightening of flock of swans,
Their feathers roughed and ruffling, white on white,
Their fully-grown headstrong-looking heads
Tucked or cresting or busy underwater.
Useless to think you'll park or capture it
More thoroughly. You are neither here nor there,
A hurry through which known and strange things pass
As big soft buffetings come at the car sideways
And catch the heart off guard and blow it open

We were both shocked to learn another one of the world's great artists had died. The Academy of American poets website is an excellent source for poets and poetry, so I was surprised to find only one of his poems there. I expect another Heaney verse or two may be added in the coming days, and that the poem-of-the-day in my inbox soon will be one of his, with the almost tacit announcement of his death (...born April 13, 1939, and died August 30, 2013).

Yet how much has Heaney left us: his collected poems is one of the great achievements in poetry since the second world war, he is regarded as the greatest Irish poet since W.B. Yeats, and his translation of Beowulf has become the new standard for the seminal Old English epic. My single favorite poetry anthology is one he edited with Ted Hughes. The Rattle Bag is arranged, not by subject, region, nor chronology, but alphabetically by title. Unlike its dry academic cousins (the kind from which Robin Williams instructs his students to rip the prefaces in "Dead Poets Society") The Rattle Bag's simple arrangement gives it a concentrated spontaneity and packs it with poetry's unique powers of compression, image, wordplay, and musical language.

Here's A Kite for Aibhin.

The website Poemhunters.com (not as authoritative as the Poets site above) has several of his popular poems, among them, "From Lightenings," from which this brief tribute takes it title. Here's that section, itself a tribute to Thomas Hardy.

from "From Lightenings"
Once, as a child, out in a field of sheep,
Thomas Hardy pretended to be dead
And lay down flat among their dainty shins.

In that sniffed-at, bleated-into, grassy space
He experimented with infinity.
His small cool brow was like an anvil waiting

For sky to make it sing the perfect pitch
Of his dumb being, and that stir he caused
In the fleece-hustle was the original

Of a ripple that would travel eighty years
Outward from there, to be the same ripple
Inside him at its last circumference.

One of his earliest poems, "Digging," finds the poet bent over his writing desk, where his "squat pen rests; snug as a gun." This startling image - so unexpected - is one of Heaney's gifts. It demonstrates the unsettling power of language. Yet there is a sensuality in his language that is always elemental: we can feel and smell and taste and touch the earth.

Outside the poet's window, "a clean rasping sound | When the spade sinks into gravelly ground:| My father, digging. I look down | Till his straining rump among the flowerbeds| Bends low,..." Heaney is in tune with the seasons of the year and of humankind. "Digging" juxtaposes the poet with his father and grandfather, men who till the soil, "digging" and getting their hands dirty with things other than ink. Here's how he concludes this "ars poetica" from his groundbreaking 1966 collection.

The cold smell of potato mould, the squelch and slap
Of soggy peat, the curt cuts of an edge
Through living roots awaken in my head.
But I've no spade to follow men like them.

Between my finger and my thumb
The squat pen rests.
I'll dig with it.

Lucky for us he "experimented with infinity" during a half-century of writing poetry we can continue to share. 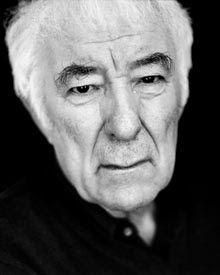 Posted by Scott Williamson at 9:45 AM No comments: