Yesterday I posted several notebook entries here: quotes from other scholars
and some of my own writings, including some poems I hope to include in a portrait
poem of Britten. Inquiring minds can also check out a couple of links on the Opera Blog,
as Britten is on the air practically 24-7 this weekend on BBC and around the UK. Cheers!

Our job is to be useful, and to the living. – Britten
from John Culshaw’s Ben – A Tribute to Benjamin Britten (in DECCA: The Complete Works)
His was a complex character, and superficially full of contradictions. He was world-famous but he did not care for the trappings of fame. He was a marvelous pianist and conductor, yet he did not enjoy performing and the prospect of a concert performance sometimes made him literally sick. As he grew older, he seemed to harbour increasing doubts about his own works – doubts which were not shared by his colleagues or by the public…

A deceptive simplicity, an earthliness, lies behind all his music, just as it lies behind the music of his beloved Schubert.
___

“There was a sort of alchemy about Ben… it [the music] poured out of him” (Jenny Walker, on the “magical atmosphere” in The Death of St Narcissus and other works from the ‘70’s).

“Ben was less a conductor than a complete musician… Every voice [in the orchestra] was clear…he kept persisting…as if by sheer force of will…it had more to do with his personality…one had an attitude to his conducting that was completely different…an almost religious attitude… it was one degree higher [compared with other conductors] – Anita Wallfisch, on playing in the ECO with Britten for repertoire ranging from Bach, Haydn, Mendelssohn, Schumann, Debussy, Shostakovich and Britten’s own works (i.e.: ’64 concert with Rostropovich – premiere of Haydn cello concerto with Britten’s cadenza’s, along with BB’s Cello Symphony).

Back to Kovnatskaya’s “Notes on a Theme from Peter Grimes.” (in On Mahler and Britten, see below)

This universe is but the discharge of passions | longs stored in the human heart. – Boris Pasternak

Mahler is the center where Britten and Shostakovich meet. “Russian Shostakovich studies devote no less an important place to the Shostakovich – Mahler digression than Britten scholars in England lend to the Britten-Mahler parallel.” (p. 177)

In “Kafka and his Precursors,” Borges wryly proves how a contemporary creator informs his interpreters’ understanding of the process of influence. Knowing the connection between Britten’s Death in Venice and Mahler’s Das Lied von der Erde, I listen to the latter in another way. Mahler influences Britten. Mahler is Britten’s precursor. This, then is the context for another example from Russian poetry with which Kovnatskaya enriches her readers: “This is one of the mechanisms of ‘cultural memory’ about which Osip Mandelstam wrote in terms of genetic continuity:”

We are all, even without realizing it, carriers of an enormous embryological experience… the whole process of experience, which culminates in the memory’s triumphant effort, is amazingly similar to the process of growth…this all develops not of its own accord,but merely as a response to an invitation, as a reaching out in justification of all expectation.

Of the inexplicable force Das Lied had on him, Britten wrote, “I cannot understand it – it passes over me like a tidal wave – and that matters not a jot either, because it goes on for ever, even if it is never performed again – that final chord is printed on the atmosphere” (from 29 June 1937, in Britten: Letters from a Life, Vol. 1). Shostakovich thought it was both “the greatest thing of genius created in music,” and given “only one hour left to live,” he said he “should choose the finale of Das Lied von der Erde” (p. 183).

Kovnatskaya concludes:
Looking at these reflecting mirrors and prisms of Britten, Mahler and Shostakovich, many new details come into focus…Britten assimilated Shostakovich’s musical language in the style of Mahler, then Shostakovich’s late style betrays elements of Britten’s musical language, again through a Mahlerian prism. Without Mahler a comparative study of the music of Bitten and Shostakovich loses in dimension, depth and inherent meaning, since for both of them Mahler was the embodiment of eternal values, of that ‘blessed inheritance’ (Mandelstam), and of that soul-scorching sense of the modern world. (p. 184)
___

Postscript: Britten’s letter of 29 June 1937 to Henry Boys opens with this wry remark:
It is now well past midnight & society dictates that I should stop playing the Abschied.

Before he describes the “tidal wave” effect of Mahler’s Das Lied von der Erde, the 23-year-old composer sounds more like a philosopher or poet:

It is cruel, you know, that music should be so beautiful. It has the beauty of loneliness & pain: of strength & freedom. The beauty of disappointment & never-satisfied love. The cruel beauty of nature, and everlasting beauty of monotony.

(Letters from a Life: Selected Letters and Diaries of Benjamin Britten, Vol. One 1923-39)

It may seem easy to dismiss such arm-chair aphorisms as the romantic musings typical of a young artist. Knowing Britten’s life and work, however, makes it difficult to read such observations as anything but prescient, if not prophetic. What might the “everlasting beauty of monotony” be besides the perfect essence of a single pure melody? Mahler’s Abschied closes with the soloist singing a descending two-note motive on the word, “ewig,” while the orchestra echoes and cushions the “eternal” essence the composer has depicted. An enormous sphere of sound – “the song of the earth” – has been reduced to a single note: a mono-tone. Britten’s texture of choice in his last decade could be seen as variations on this theme. His beloved Gamelan music, and the timeless chant-inspired textures of the late works aim for such an everlasting beauty, that, however rarified, simple and austere, is anything but monotonous. 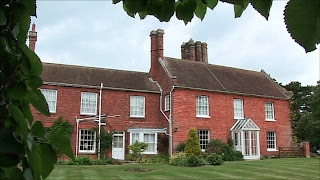 (The Red House, Aldeburgh - where Britten and Pears lived from 1957)

Posted by Scott Williamson at 11:02 PM