Circle of Fifths: Musings on the Figure 5 for my wife on our Fifth Anniversary…

One of the first images that comes to mind when I consider the figure 5, is the William Carlos Williams poem, “The Great Figure.”

Among the rain
and lights
I saw the figure 5
in gold
on a red
firetruck
moving
tense
unheeded
to gong clangs
siren howls
and wheels rumbling
through the dark city. 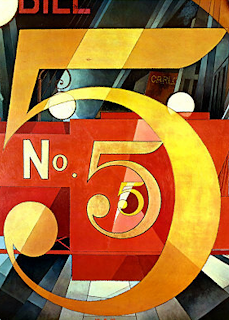 It inspired the above iconic 1928 painting by Charles Demuth, entitled “The Figure 5 in Gold.” Williams similarly epigrammatic poem, “The Red Wheelbarrow” is inscribed on the back of an expressionist portrait my friend and former student, Robert Farmer painted of me, which is among my wife’s favorite pieces of original art in our collection.

The great figure 5 is also the mysterious and mystical “Fifth Element,” hinting at the beyond and an alternate dimension. The 5th planet from the Sun is Jupiter (Zeus in Greek mythology), the lord of the titans. In Holst’s symphonic suite, The Planets, Jupiter is “the bringer of jollity.” This is fitting for the 23rd of June: the two numbers of which total 5, of course. The trinity of 3 and the perfect pair of 2 are symbolic themselves. Today is also Midsummer’s Eve or St. John’s Eve, a day of celebration in conjunction with the Summer Solstice, the fertile and luminous season of growth and light. Midsummer is the setting of Shakespeare’s great comedy of the interpenetration of the mortal and spirit worlds in A Midsummer Night’s Dream. It is the setting of Michael Tippett’s marvelous first opera, The Midsummer Marriage. Hans Sachs passes the Meistersinger torch to the young initiate Walther von Stolzing on St. John’s Eve in Wagner’s melodic masterpiece, Die Meistersinger von Nürnberg. Today also happens to be the anniversary of our beloved cousins, Tracy and Jeff Sonafelt. We are celebrating this midsummer in one of the most idyllic spots we know, on Lake St George in Liberty, Maine, as guests of our dear friends Kari Foster and Rick Hurwitz.

Since we have touched on the magical harmonies inspired by Midsummer and the union of 2+3 = 5, this circle of 5ths (itself a guide to the harmonious progression of chords separated by the “perfect” interval of the 5th) will conclude its brief digression with a mention of great 5th symphonies. Beethoven’s “knock of fate” symphony is among the most beloved and performed essays in the genre, and inspired every composer in his wake. Beethoven’s 9th would redefine the symphonic genre and force future composers to consider what their own "9th's" would be, given the inevitable comparisons to Beethoven’s towering achievement. The same comparisons hold for the 5th symphony. Thanks to Beethoven’s incredibly affirmative statement, "5th's" are frequently luminous and exuberant works, full of lyrical cantabile melody and unified, well-argued statements of form marrying content.

The most famous and beloved 5th after Beethoven must be Mahler’s, whose 5-movement work is an example of the axiom that tradition is not inherited but made. The famous Adagietto for strings and harp, the penultimate movement of Mahler 5, is one of the most beautiful adagios ever written, and was surely a love-message, a "song without words" to his beloved, Alma.

The self-contained 5th symphony of economic compression is by the Nordic Apollo to Mahler’s Dionysus, the great Finnish composer Jean Sibelius. Sibelius 5 is a three-movement work shorter than some of the single movements of Mahler and his one-time teacher, Bruckner - whose 5th is among his greatest achievements – grand and elegant, Teutonic and elemental. Sibelius was beloved in the English speaking world during his lifetime, and has returned to his well-deserved place after a period of neglect during the creative silence of his final thirty years. His 5th embodies the Aurora Borealis or the Northern Lights.

Ralph Vaughan Williams’ 5th symphony is dedicated to Sibelius. It is among the most lyrical and romantic of his 9 symphonies and though we don’t know what Sibelius thought of the dedication, he should feel gratified at such an elegant tribute. The neglected British composer Arnold Bax was another admirer of Sibelius, and his 5th symphony is indebted to the Finnish master. Sibelius’ successor as the figurative musical dean of Finland is Einojuhani Rautavaara. Rautavaara’s 5th is a single-movement essay from the mid 1980’s. Like many of the octogenarian composer’s autumnal works, it is full of lyricism and colorful orchestrations evoking the Nordic landscape and ethereal birdcalls.

The northern landscapes - and their corresponding inscapes of emotional depth - in Russia inspired great 5th symphonies from Tchaikovsky, Prokofiev and Shostakovich. Tchaik 5 is a Beethovenian statement of faith, and its slow movement has one of the most beautiful horn solos in the repertoire. Prokofiev and Shostakovich both wrote works reflecting their war-torn and politically volatile climates, respectively. Both are considered among their respective composer’s genuine masterpieces, and possessed of individually haunting beauties.

A 5th that is overlooked as a symphony because of its status as both a tone poem and a piano concerto (with obligato wordless chorus) is Scriabin’s mystical masterwork, “Prometheus, The Poem of Fire.” Scriabin’s “Symphony No. 5” recalls Beethoven, who also wrote a Prometheus-inspired ballet score. Liszt's 5th symphonic poem happens to be Prometheus. If only more recent mythic adaptations could be so alive! Unlike the vapid Ridley Scott film ostensibly inspired by the myth of the Greek titan Prometheus, Scriabin’s symphonic poem evokes a sense of wonder, mystery and possibility. One of the original tricksters, Prometheus rebelled against the titans, bringing "the gift of fire" to humankind, and enabling not only art and industry, but also forging the possibility of human independence. An archetypal symbol for the artist, he was tortured for his bold vision. Scriabin's symphonic poem centers around the gift and the magical sense of possibility engendered by creativity. His Prometheus is a richly colored canvas that is romantic, impressionist and expressionist at once. The Promethean fire of creativity is kindled at Midsummer, and the circle is complete in the perfect union symbolized by the wedding ring.

Postscript: Nielsen 5. I neglected to list Carl Nielsen's sui generis 5th symphony. The Dutch composer's 6 symphonies are each individual expressions of music's ability to not merely depict life but to actually pulse with life itself. The 5th is in two movements, the first of which is divided into two nearly equal 10 minute movements, and the second consists of an Allegro, a Presto, an Andante and a culminating Allegro. Of his most famous symphony, the 4th, he explained his programmatic title, The Inextinguishable in a great paragraph that bears quoting. It applies to our theme of life-affirming music, Midsummer festivities and the joys of shared human life.

"The title Inextinguishable suggests something that only music itself can express fully: the elementary will of life. Only music can give an abstract expression of life, in contrast to the other arts which must construct models and symbolize. Music solves the problem only by remaining itself; for music is life whereas the other arts only depict life. Life is unquenchable and inextinguishable; yesterday, today and tomorrow, life was, is and will be in struggle, conflict, procreation and destruction; and everything returns. Music is life, and as such, inextinguishable."

Posted by Scott Williamson at 2:44 PM