(This is for my fantastic Cenerentola colleagues)

Last night's opening of La Cenerentola at Opera Roanoke embodied the ideal of exuberance. The cast was uniformly "on," the orchestra played as well as they ever have under my (sometimes airborne) baton, and the audience was more responsive than I've ever heard them. Paraphrasing Julia Roberts and Richard Gere in Pretty Woman, "I almost peed my pants!" "She liked it better than 'Pirates of Penzance.,,'" I'd say our audience did, too.

Unconscious of the eminent connection, I pulled down Kay Redfield Jamison's book, Exuberance, from one of the many piles of books stacked on any number of shelves. If you replace this excerpt's subject with "opera singer," and throw in "singing rapidly in a foreign tongue," then the play described here is humorously apt to the exuberance our fantastic cast exhibited:

In her classic study of Australian wombats, Barbara Triggs writes: "Wombat play is made up of several characteristic movements and attitudes performed in no particular order but with tremendous enthusiasm and exuberance. Typically, a young wombat signals the beginning of playtime by standing absolutely still… Then it jerks its head back and shoulders up, sometimes lifting its front feet right off the ground. Then, but not necessarily in this order, it tosses its head from side to side; jumps in the air with all four feet off the ground; rolls over to its side; races off at a rocking gallop before coming to a sudden stop, reversing through 180 degrees 'on the spot' and racing back to its mother, stopping or veering sideways just before the expected collision; lies flat on its stomach, head thrown back and swinging from side to side, lips drawn back in a wombat 'grin.'"… Triggs, acknowledging the infectious quality of the marsupial's exuberance, concludes by saying "I defy anyone to watch a wombat at play without laughing aloud." (Exuberance: The Passion for Life, Kay Redfield Jamison; Knopf, 2004). 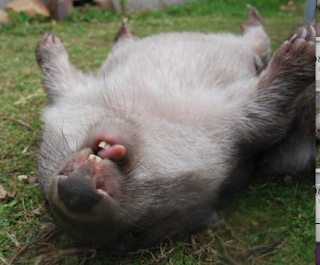 I am so grateful for all of your talents and energy, and I look forward to another galumphing performance of Rossini's ebullient dramma giocoso with you all tomorrow! 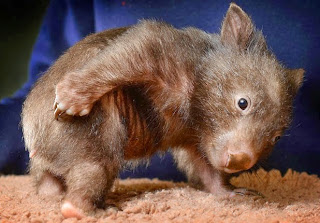 Posted by Scott Williamson at 6:04 PM